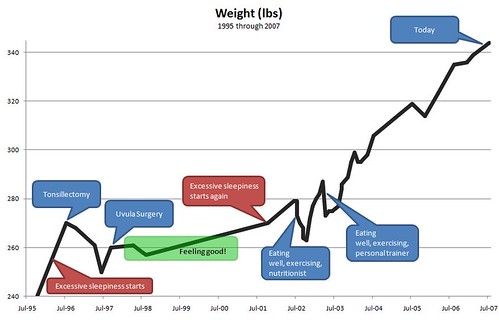 I sat down and crunched some numbers today.

At various times throughout the last 12 years, I kept a health journal. Among other things, I kept a log of my weight.

Putting these numbers together with some medical records I found, I was able to plot this graph, which shows my weight over the last 11 years. I then added a few notes, which appear in the colored blurbs.

On three separate occasions, I tried desperately to get healthier.  I began eating right, exercising, and watching my weight for several months.  You can see two of them on the chart.  Throughout the course of the first phase, I saw a nutritionist regularly.  Throughout the second phase, I had a personal trainer, with whom I met twice a week.  You can see several big dips in the chart, showing marked improvement with my weight... but alas it was short-lived; I couldn't maintain the weight loss much longer than 6 months.

From the chart, we can see the obvious trend: my weight has gone up... way up.

But the chart doesn't tell you that my daily calorie/fat intake and my levels of physical activity have stayed roughly the same over the last 11 years. Granted, I don't eat very well. At all. But this has been the case throughout my adult life. I was eating two fast-food meals per day in 1997. I could eat an entire large pepperoni pizza at one sitting then, just like I can now. Why am I nearly 100 pounds heavier now?

Granted, I'm a little older. But then again, I'm only 33... and the upswing has been happening since I was 25.

1998 was a good year for me.  I had UPPP surgery, and the results were astounding.  Relief from apnea was nearly instant.  Within a week, I got my energy back. I was alert, I slept well, and I had no problems staying awake during the day. I maintained consistent results for three glorious years, and I really believed I had been cured permanently. (You'll even note that I stopped recording my weight... no plot points on the chart during that time marked in green. I just didn't feel the need anymore, because I just felt good.  But the weight crept-up, and my apnea eventually returned in 2001.

The other trend I see is that every time I lost weight, I then gained it back and then some... as though my body was retaliating. It almost seemed as if my metabolism was trying to make-up for lost time and all the missed calories.  The pounds returned, and with a vengeance.

There are many studies which suggest that the "rebound effect" is not a figment of my imagination. From a recent article on Intelihealth.com:

Even in the best medically supervised programs, nearly two-thirds of participants are back where they started within three years and 80 to 90 percent within five years, says Gary Foster, Ph.D., clinical director of the Weight and Eating Disorders Program at the University of Pennsylvania.

For people who lose weight on their own, the relapse rate may be even higher.

80 to 90 percent within five years. That's an abysmal success rate.

How many people do you know have lost a significant amount of weight (say, 40 pounds) "and kept it off" for longer than 5 years? I only know of two. (Who I found here on LJ, by the way.)  Anyone I know who has tried to lose a lot of weight has ended-up gaining most of it back... or more.

I am confident that I could lose 30 pounds, if I put my mind to it.  I am not so certain that I can keep it off for more than 5 years.

Acknowledged: weight is not the only indicator (and it's not even the best indicator) of health.  Still, for reasons I will get into later, it's an important metric for me because of my sleep apnea.

I have many more things to say on this topic, but I will let this suffice for now.

Anyone who replies with eating and exercise suggestions will be beheaded... especially any mention of "don't call it a diet, call it a lifestyle change..." I've been hearing that one since I was 14.  It means nothing when you're staring at that giant cheeseburger during a moment of weakness.
Tags: health
Subscribe